My time at Howard went quickly. When I drove cross-country to DC with my luggage and my cat in May of 2015, I was excited about many things: having a job with benefits, a new role as a faculty member after many years as a graduate student, new opportunities for learning at Historically Black University, and starting a new life in Washington DC. The transition from Santa Cruz to Washington DC went smoothly. Even though I’d never lived anywhere more than an hour away from the San Francisco Bay area for more than five months, life in Washington DC wasn’t hard to adapt to. People are people, after all. I (mostly) got used to the fact that it rains in the summer, gloried in the fireflies, tried to adopt the more formal dress-code and mode of address (“hello, Dr. so-and-so”), and then settled into a middle ground between Santa Cruz and DC professional standards. I met wonderful new friends and quirky, smart colleagues, got to know dedicated students, and developed what I believe will be a lasting interest in Black Studies.

I drove back across the country to Arizona this spring a little older and a little wiser. A few things were different this time. My cat and I were accompanied by my partner, I was six months pregnant, and we drove a rented RV to minimize our exposure to the coronavirus pandemic that had exploded in the US a short time before. The pandemic restrictions got looser and looser as we traveled west from DC. When we arrived in Arizona hardly anyone was wearing masks, and the host of our RV campground referred to the virus making scare quotes around the term with her hands as she talked (“virus”). Soon after, George Floyd was murdered. Protests across the nation, including here in Pheonix, have brought longstanding anti-black police violence more forcefully into the national eye. The resulting conversations led to working with my partner Vernon Morris, my tech mentor Allen Gunn and several of Vernon’s colleagues on a public letter to address systemic racism in the academy. It was one of many such letters, the results of which are still unspooling.

I miss my friends at Howard and in Washington DC, but I’m looking forward to new adventures here in Arizona. My position in the School for Social Transformation promises many new and interesting colleagues, even if it will be a while before I meet them anywhere other than on Zoom. The coronavirus pandemic, soaring temperatures in Tempe and a newborn at home mean I have rarely left the house since arriving. But the weather will cool off eventually, and I look forward to exploring the desert and the mountains that surround Phoenix when that happens. I’m grateful to have stable employment and health care in these troubled times – so far, ASU has not announced any layoffs or furloughs. 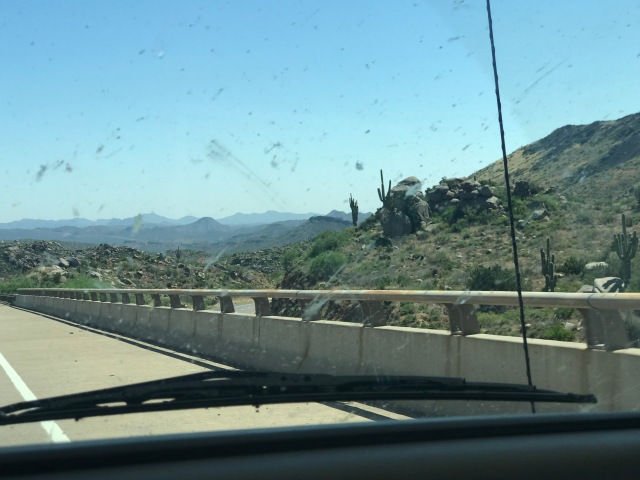 First siting of saguaro cacti as we drive West, as seen through a very dirty windshield.

Today was the first day of the fall semester here at Howard University, and also the first day of my new class: Sociology of Food and Agriculture. Check it out below! Students, if you are still looking for a class to take, I have room in this one so come on by. We’ll be applying our sociological imaginations to something we all do every day but don’t always think that much about: eating. To do so we’ll read about the origins of the US food system, labor organizing, the industrialization of the food system, land ownership and loss, shopping, eating, and hunger. We’ll also be using what we learn in class to contribute to Wikipedia with the help of the good people at Wiki Education.

Instructors, if you are interested in incorporating a Wikipedia assignment into one of your courses, Wiki Education has a lot of tools to help you do so – everything from sample assignments to training videos and semester-long timelines. They also offer individualized class support to you and your students.

As usual, thank you to everyone who helped me think through what to assign in this course. Friends, colleagues, the Food and Agriculture Specialty Group of the American Association of Geographers, and the Critical Race Theory and Food Studies list run by Breeze Harper all contributed.

Sociology of Food and Agriculture Syllabus from teperkins

This is the second in a series of blog posts about the Environmental Inequality class I taught this fall. The first post shared the class syllabus and research project. This post covers a movie I’ve enjoyed using the last two times I taught the class, Leah Mahan’s Come Hell or High Water: The Battle for Turkey Creek.  Here’s the film description:

Come Hell or High Water: The Battle for Turkey Creek  follows the painful but inspiring journey of Derrick Evans, a Boston teacher who moves home to coastal Mississippi when the graves of his ancestors are bulldozed to make way for the sprawling city of Gulfport. Over the course of a decade, Derrick and his neighbors stand up to powerful corporate interests and politicians and face Hurricane Katrina and the BP oil disaster in their struggle for self-determination and environmental justice.

I’ve shown the film in my Environmental Inequality class twice now, and it has been helpful both times. In 2015, we learned about Turkey Creek at multiple points throughout the class. I showed the 2011 Daily Show clip about Turkey Creek early in the semester. My previous descriptions of using this clip are available here, here (at Jan. 13), and here. This time around I showed the clip on the day we were learning about the distinction between the environmental movement and the environmental justice movement. I emphasized that while it is wise to take the the specifics of the Daily Show’s coverage of Turkey Creek with a grain of salt, the clip speaks to real tensions between environmental efforts that focus on habitat preservation and environmental efforts that focus on human wellbeing and cultural preservation. This clip unfailingly generates incredulous responses and good discussion.

A bit later in the class, we returned to Turkey Creek on the day set aside for natural disasters. I used the following two readings that day – the second discusses Turkey Creek:

Finally, I screened Leah Mahan’s documentary toward the end of the class. Returning repeatedly to Turkey Creek in our class gave the students a real-life story to think through as they learned new facets of environmental inequality and the activism that responds to it. Using the film at the end of the class provided a way to tie together and bring alive many of the threads about which we had been learning. Indeed, one of the students was so enthusiastic about the film that she helped me launch an annual environmental justice film screening for Earth Day. The inaugural film featured was, you guessed it, Come Hell or High Water.

Several aspects of the film make it great to show as part of environmental justice education efforts. First, it shows how environmental destruction has impacted human life (most memorably through increases in flooding due to paving over wetlands that previously absorbed heavy rains). Second, it clearly depicts how racism and classism influence development in ways that produce environmental and human harm.

Third, the film addresses the pleasures and cultural significance of the outdoors to the historically black town of Turkey Creek. This is a great antidote to the Daily Show clip, which features a more disdainful view of of the potential pleasures of outdoor activities, even as one of the interviewees appears to be enjoying herself while birding, and another talks about birds’ revered local status. The film’s inclusion of the potential pleasures of the outdoors helps me to correct for the environmental justice literature’s sometimes overly simplistic portrayal of people of color environmentalism as focused exclusively on urban areas and industrial pollution, and white environmentalism as focusing exclusively on habitat preservation and outdoor leisure activities. While racial divisions and tensions between these two approaches are real, it certainly isn’t true that people of color have no relationship to the environment outside of the health impacts of pollution.

Finally, while the film focuses on a central character who leads the charge to protect Turkey Creek, it does not portray him through the usual “great man” narrative. We see clearly that Derrick Evans, the protagonist, is doing important work in his home town. But we also see how difficult the journey is, and how much it costs him. I appreciated that the director resisted the temptation to simplify the problems he faced and depict them as solvable through a single person’s heroic actions. The results is a film that dovetails with my efforts to encourage my students to analyze the complexity of environmental inequality, and the scale of the change necessary to address it.

So, that was what I did with the film in 2015. In the fall of 2016, I showed Come Hell or High Water at the beginning of the semester instead.  I paired the movie with our early coverage of disasters and climate change (see the readings I used this time here). My thinking was that just as the film could be used at the end of the course to help tie everything together, so too it could be used at the beginning to help introduce the course content. This approach also seemed to work well, but I think I prefer the end-of-the-semester screening for the richer, better informed discussion that it generated.

All in all, I recommend the movie! If you use it in your own classes or at a campus screening, I’d love to hear how it goes. I’m sure director Leah Mahan would too.