This spring I was honored to host Nora McDowell as the inaugural speaker at the Smithsonian Anacostia Community Museum’s first “Dinner and Discussion” series, which is part of their Women’s Environmental Leadership programming.

Now, Nora is the Project Manager of the Topock remediation project at the AhaMakav Cultural Society of the Fort Mojave Tribe. Topock is the name of the place that is the passageway to the spirit world for the Mojave people. PG&E built a natural gas compression station there in 1950, which leaked chromium six into the groundwater for over 40 years. Nora focuses much of her time on the cleanup of this site, and in particular trying to minimize the impact on the remediation process on Mojave landforms and artifacts. She also serves in an advisory capacity in a number of other settings, including on the Tribal Advisory Committee to the California EPA. She also serves on the Colorado River Basin-wide tribal advisory board, which advises a consortium of federal agencies, tribes and NGOs active on the Colorado River. She is also on the Fort Mojave telecommunications board and is a founding board member of WEWIN – Women Empowering Women for Indian Nations.

The Anacostia Museum hosted the evening in the Smithsonian Castle on the National Mall. It was an intimate event. I asked Nora questions about her leadership experiences in front of 40 or so attendees, and then we all discussed the themes she raised and shared a meal together. You can find the audio recording below, as well as photos taken by Susana Raab. Audio, photographs and captions are provided by the Smithsonian Anacostia Community Museum.

The next “Dinner and Discussion” event will take place in September, this time featuring Dr. Adrienne Hollis, hosted by Vernice Miller-Travis. 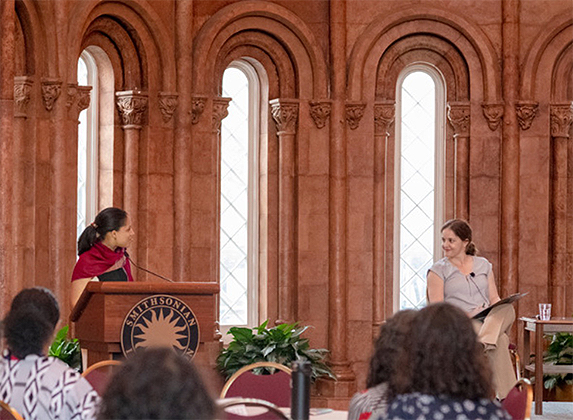 If you’ve ever been to a workshop on how to write an op-ed, you’ll know that the leaders spend a lot of time talking about the need for your piece to have a “hook.” This usually means finding a way to link what you want to say to some kind of timely news event. Most of these are fairly straightforward. On Mother’s Day, you publish your op-ed about the need for state-sponsored maternity leave. On Valentine’s Day, you write about worker abuses and pesticide poisoning in the international cut-flower industry. Or, for another Valentine’s Day idea, you write about fossil fuels.

Wait, what? How do fossil fuels go together with Valentine’s Day? Well, watch “Breaking Up With Fossil Fuels is Hard to Do” for an example of a masterful, if somewhat unexpected, media “hook.”

Then, use it in your classrooms!

Thank you to Jean Boucher and Milton Takei for sharing these videos on the environmental sociology listserve of the American Sociological Association. Happy teaching! 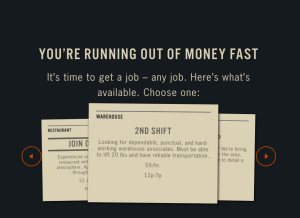 One of the activities that went particularly well in my “Women and Work” class last winter used the website playspent.org. This website is an online “game” that challenges users to make it through the month with one of three low-wage jobs without going broke. The premise is that you are one of the many Americans who have just lost your job and your home and are down to your last $1,000 in savings. Users first select a job, then choose how far away from that job to live. At each decision-point, the consequences are made clear through short pop-up text boxes and interactive features. For example, if they choose to live farther away from their job in order to reduce rent costs, their gas expenses for commuting to the job go up. After several set-up choices are made, the month begins. Users are faced with a series of real-life scenarios to respond to as the month progresses. For example,

“Your child wants to join an after-school sports team, which requires a physical and a uniform. What do you do? Say yes ($50). Say no.”

At other moments users have to select what items to purchase at the grocery store, get paid, get strikes on their record for taking time off from work to contest a speeding ticket in court or stay home sick. At each decision point, short pop-up text puts the decision into a national context, and the amount of money they have left to get through the rest of the month changes accordingly.

I had my students “play” the game in class on one of the days dedicated to wages. I had a regular classroom, not a computer lab, so this required students to bring their own laptops. The day before I asked for a show of hands of how many people had laptops that they could conveniently bring to our next class, and enough hands went up to proceed. On the appointed day there were enough laptops in the room for students to break into groups of two to four to play the game together. Each group played the game on their own. Many went through it several times to see how they fared while making different decisions. The discussion questions below were displayed on the overhead projector while they played. I floated around the room to see how people were progressing while they played. Students got very involved with the activity, as indicated by the difficulty I had getting them to stop and the amount of noise they made!

After I called a halt to the game and got everyone to close their laptops, we discussed the experience with the questions below. (I adapted these questions from similar ones provided by Brooke Kelley on the Sociologists for Women in Society list-serve. Thanks Brooke!)

The students had lots to say. Those that grew up in more financially stable households found the experience of trying on low-wage work eye-opening. Students that grew up facing similar financial difficulties seemed to find the experience validating, and shared further examples with the rest of the class. All in all, this is an activity I would do again.

This activity was paired with the following readings:

In Her Own Words: Remembering Teresa De Anda, Pesticides Activist (1959-2014)