This is the third post in a series about the Environmental Inequality class I finished teaching earlier this month. The first post shared the syllabus and class project, and the second described how I’ve used the documentary Come Hell or High Water: The Battle for Turkey Creek. This post describes the first of two field trips we took – a boat tour of the Anacostia River.

Who: Our tour-guide was Jim Foster, executive director of the Anacostia Watershed Society. We were also joined by the person who organized the trip for us, Tony Thomas, the Education Coordinator at the Smithsonian Anacostia Community Museum and board member of the Anacostia Watershed Society. A few other faculty joined in for the fun, as did one of our class research project partners from Empower DC, one of the residents whom the students would later interview for the class project, and the executive director of Energy Justice Network.

What/Where: The tour began and ended in the Bladensburg waterfront park in Maryland. We got on one of the Anacostia Watershed Society’s boats and drove slowly up the river into Washington D.C. and back. The first half of the tour was largely spent listening to Jim Foster describe what we were seeing as we went. On the return trip conversation broke into smaller groups and the students enjoyed just being out on the water. After the tour, Tony Thomas took a smaller group of us to see two trash-traps that divert trash from the river.

When: We took the trip about a third of the way into the semester. I wanted to do the trip relatively early in the semester as a way to help the students learn about some DC issues before diving into our off-campus research project. We also needed to get the trip in before the weather got too cold.

Why: I organized the field trip as a way to help the students connect some of what they were learning inside the classroom to Washington D.C. I also hoped the trip might be informative for our class research project (the Anacostia River forms one of the borders of Buzzard Point, the neighborhood at the heart of our project).

How:  I assigned the following two readings to prepare the students for the trip. The first gives a socio-ecological history of the river that begins before European colonization and continues through the end of the 1990s. The second is an 11 minute video about efforts to clean up the river, which was historically one of the most polluted in the country.

Outcomes: Several themes somewhat in tension with each other emerged amongst the students as we reflected on the tour in class the following week. Because of the stigmatization of the Anacostia River as both dirty and dangerous, many  of the students who grew up in Washington DC and the surrounding areas described being pleasantly surprised at how scenic the river was, and how many people were out enjoying it. At the same time, some were a bit shocked by the spare tires they saw here and there in the river as real-life, visible examples of pollution (for my part, I didn’t think there was much trash on the river at all, spare tires or otherwise). Our tour-guide’s discussion of how raw sewage flows directly into the river when heavy rains overflow the local sewage infrastructure also made quite an impression. So did the discussion of how poverty leads people to eat the polluted fish they catch from the river, despite the signage warning them against doing so and sometimes visible lesions on the fish.

An encounter with a baby deer that had gotten stuck in the water and couldn’t climb over the low wall at the river’s edge also was memorable for many of the students. Jim Foster used this as a teachable moment to make a point about the need to take down some of the old walls along portions of the river’s edge. (For those of you concerned for the deer’s fate, you’ll be glad to know, as my students were, that a passing group of boaters later ushered the deer to a safe exit further down the bank.) The students were also very interested to learn about the history of the Seafarer’s Yacht Club, one of the country’s oldest black yacht clubs. Several expressed interest in participating in the Yacht Club’s annual river cleanup for Earth Day.

There were a few conversations that interested me greatly but my students mostly missed because, 1) many had broken up into smaller conversations by then, or 2) they were unfamiliar with the technical language being used, or 3) were not yet well equipped to quickly recognize common areas of environmental conflict. One was a debate between one of our hosts and an environmental justice activist on board concerning the pro’s and con’s of waste-to-energy facilities/incinerators. We read about this topic later in the semester through this short piece on the multiple meanings of renewable energy that I co-authored with Lindsey Dillon. There was also some tension in a conversation about the relationship between river-clean up efforts, riverside redevelopment, and and the threat of displacing current residents due gentrification. My students read about this subject later in the semester through the lens of “green gentrification.”

Overall, the experience was a great way for all of us to learn more about how the issues we read about in class play out in the city beyond our classroom walls. On the last day of class, when I asked my students to reflect on what they learned that was most interesting, surprising or memorable, things they saw on the boat tour were a central theme. Take a look yourself below.

Students Cameron Clarke and Amanda Bonnam settle in for the tour. 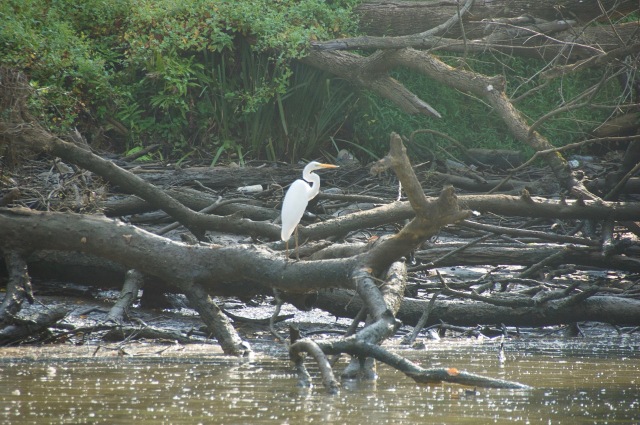 Wildlife sitings were a big hit, here’s our first egret of the day.

We saw a bald eagle!

This baby deer trapped in the river by a low wall along the river bank prompted great consternation among the students (the deer was later rescued).

One student even took notes!

Student Joseph Dillard taking it all in.

… with a few abandoned tires here and there.

Riverside signage warns people against eating the fish they catch here, which pick up unsafe levels of pollution from the water.

New construction designed to resolve the problem of raw sewage flowing into the river during heavy rains.

These will line the wall of a giant tunnel being built to contain runoff during heavy rains, which now mixes with sewage and overflows into the river. 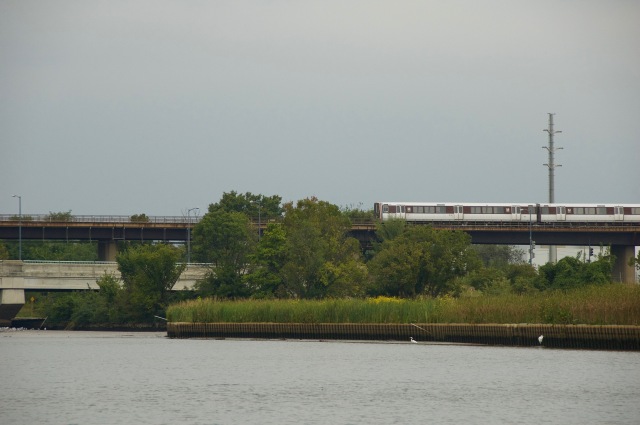 We passed lots of other groups out on the water, including this crew team and their coaches. 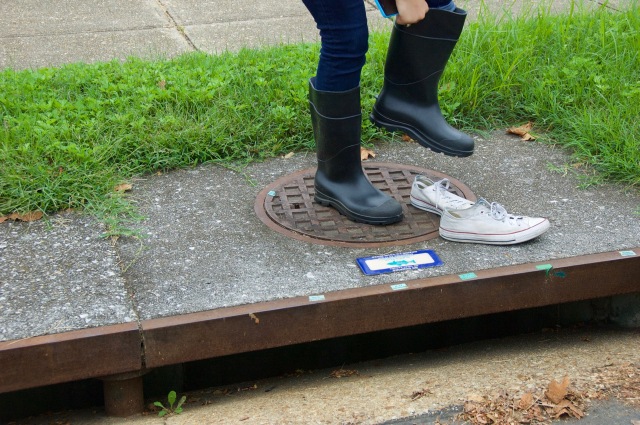 After the river tour, Tony Thomas took a smaller group by car to see two trash-traps. 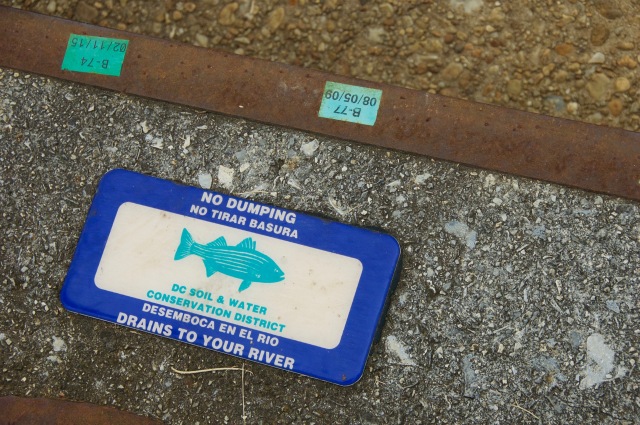 Whatever is on the road eventually ends up in the river. 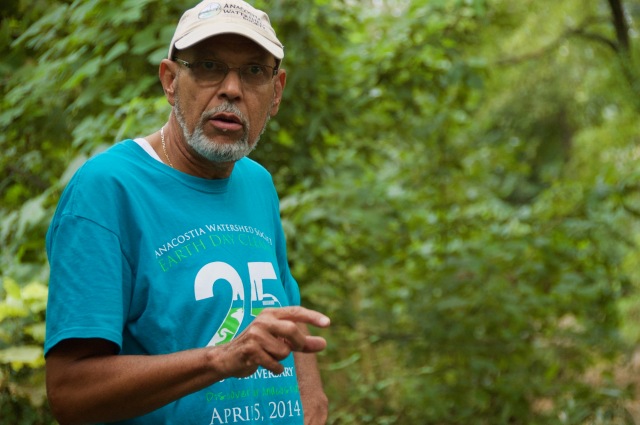 When this tributary into the Anacostia River is flowing, the water flows through these bars and the trash stays behind. 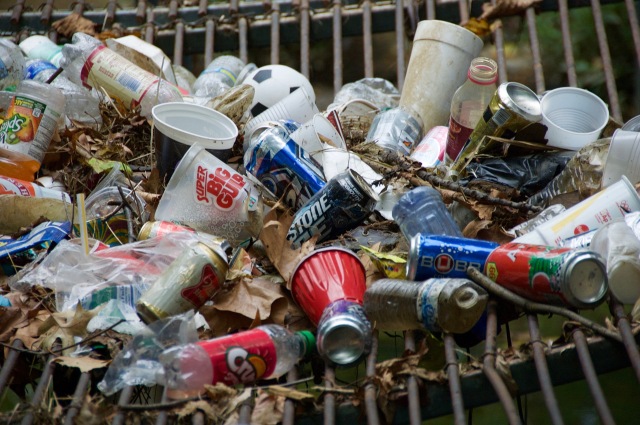 Lots of the captured trash could have been recycled but ended up on the streets instead, and from there makes its way into the the river.

Leaving trash trap #2, near the now-closed Kenilworth landfill. The landfill was built next to the historically black neighborhood of Deanwood.

* Mike Ewall, Executive Director of Energy Justice Network, e-mailed me the following when I sent a note asking him to jog my memory about this photo: “This is the Benning Road trash transfer station — one of two large trash transfer stations that the city’s Department of Public Works (DPW) operates. The other is at Fort Totten.  It also used to be the home of DC’s trash incinerator, from 1972-1994, and is the place that the leaders at DPW were nearly certain to have tried to locate the new incinerator they were exploring a few years ago before we derailed that conversation in 2013. We = Energy Justice Network, Sierra Club, ILSR, and DC Environmental Network. The community around it is 98% black and 52% of the people are below the poverty line. That site also hosted the oil-fired Pepco power plant that shut down in June 2012, and was torn down in more recent years.  That plant left behind a toxic waste site that remains to be cleaned up and won’t be fully cleaned up. Ash from the old incinerator there is in the Kenilworth Landfill just north of there, next to public housing. The landfill is now a Superfund site that the National Park Service plans to “clean up” by merely dumping two feet of soil on it. It’s currently used as a ball-field / park by local residents.”