Ruth Martinez is a community organizer who lives in the small town of Ducor in the San Joaquin Valley. I interviewed her several years ago for my Master’s thesis and wrote the story below based on what she told me about how she came to be an activist. I stopped by her house this morning to get her permission to share her story.  Ruth was keeping off her feet after having broken her foot on a recent United Farm Workers of America (UFW) march to Sacramento.  Besides her involvement with the UFW, Ruth is also active with the Center on Race Poverty and the Environment, the Community Water Center, and the Asociación de Gente Unida por el Agua.

Ruth’s story begins with her marriage at 15.  Her husband was a farm worker who was active in the UFW.  She joined him on the marches and political campaigns that were connected with his work.  Ruth had always wanted to be a nurse, but from a young age she had epileptic seizures.  As she told me, “César Chávez never said, ‘No, you can’t.’  That’s why his slogan was ‘Si, se puede,’ because yes, you can.”  Ruth’s husband took her to a UFW meeting at 40 Acres in Delano, which had a clinic for farm workers at that time.  Ruth saw the nurses and said, “Oh, I always wanted to be a nurse.”  César heard her and said “Well, why aren’t you?” Ruth said, “Because I can’t.  I get seizures and everybody’s told me I’d never be able to be a nurse because of my seizures.”  César said, “You can be anything you want to,” and helped her go to nurse’s aide training.  Ruth worked as a nurse’s aide until she finished college and received her nursing degree.  She was a nurse for 30 years before retiring.  After one month of retirement she became tired of not doing anything and went back to work.  Now she works at a unionized (UFW) rose farm, taking out the thorns that get stuck in the farm workers hands, face and eyes and seeing to other health problems as well.

During her years as a nurse Ruth would go on the UFW marches to take care of people who got sick or who had too many blisters on their feet from marching.  She remembers one march from Delano to Sacramento in particular.  She got upset because the organizers put her in a van to tend to the sick but she wanted to be out marching.  She describes the impact of starting with about 20 people in Delano and ending in Sacramento with thousands.  She remembers how the Teamsters and just about everyone else worked against them on that march, and how different it was from a march from Merced to Sacramento that they did around 1990 or 2000.  This time the Teamster’s lent them their hall in Sacramento to sleep in; the police provided an escort; and truckers stopped to get them sodas and water to drink as they marched.

Ruth and her family moved from a home surrounded by a grape orchard to the small town where she still lives.  Her family, and many of the neighbors, had “self-help” houses built for them because of their low-income status.  Early on there were problems with the water supply in town, and residents were told not to flush their toilets at certain hours, and to only take showers at other hours.  Ruth felt this wasn’t right and asked her sister, who worked at a regional non-profit, to send a legal assistant over to help resolve the problem.  Ruth began collecting signatures in town to replace the private water company with a community service district that the whole town would co-own.  The campaign was successful and very personally meaningful to Ruth, who years later ended up on the water board for the town.

For a time the water system worked well and provided them with clean water, albeit sometimes at low pressure.  But later the town began having problems with their water again.  This time it smelled terrible and in many houses came out looking brown and muddy.  Ruth had already been introduced to the environmental justice organization nearby, and began working on the water problem with one of their organizers.  They formed a committee for people in the San Joaquin Valley with water problems, and went to Sacramento, Fresno and San Francisco to attend various water board meetings in an attempt to resolve their problem.  Ruth faced strong opposition from her local board when she brought bottles of the smelly brown water collected from neighbors’ homes as examples of what they had to live with.  Ruth and the other neighbors still had to pay for the poor-quality water that they were receiving. She used bottled water to cook with but bathed in the tap water, although she used bottled water to wash her hair so it would not retain the sewage smell of the tap water.  Ruth’s grandchildren would come to visit and Ruth would bathe them, but then her daughter would find rashes on the children, which they decided must have been caused by the water.  During this time several of Ruth’s old UFW friends joined the nearby environmental justice group, and began inviting her to meetings that they were organizing on pesticide buffer zones and the possibility of receiving a grant to put in sewage lines in her town.

Ruth’s father died when she was young.  Her mother spoke little English, and Ruth credits her with very little influence in terms of her own work as an activist. Somehow she and her sister ended up being the only ones in their family who were “a little pushy”, and tried to fix things when they thought something was wrong.  She thinks the female movement must have had a lot to do with it.

Toward the end of our interview I asked Ruth if she has any children, and she told me that she has four.  Ruth’s first child is the healthiest, and she was born before Ruth and her husband moved to a home in the middle of a grape orchard.  Of the second two children born on the ranch, one was born with only one kidney* and one has high blood pressure and diabetes.  The fourth child has a serious case of asthma.  Ruth attributes the child born with one kidney and the other child’s asthma to the pesticides to which they were exposed.

Now, at 65 or a little older, Ruth is still working as a nurse.  She works on local and regional water issues, and continues to support political campaigns that are backed by the UFW.  Most recently, she went to Los Angeles to support Antonio Villaraigosa’s campaign to be the first Latino mayor.  She walked the streets and talked to the voters on election day.  She also works with Catholic Charities registering new people to become citizens.  Her husband died 12 years ago of a heart attack and diabetes.

* Ruth’s daughter passed away in November of 2010. 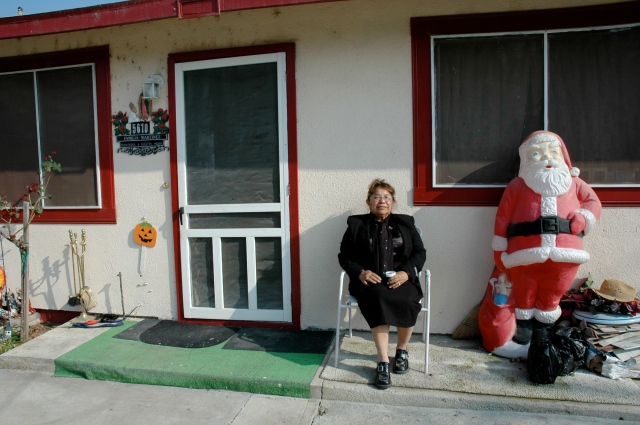